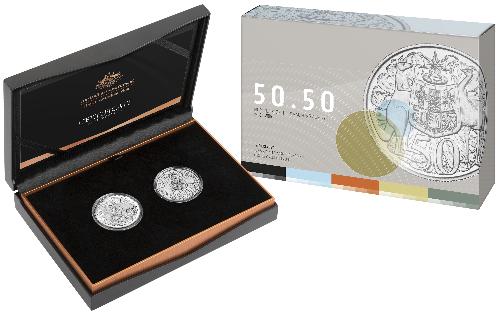 As a celebration of the Royal Australian Mint’s golden anniversary, this set presents fifty cent coins of yesterday and today. Featuring a genuine 1966 fifty cent coin alongside a 2015 mintmarked proof coin, it symbolises the remarkable history that these pieces have spanned, and will be highly sought after by a wide range of collectors.

• Genuine round fifty cent coin from 1966, ultrasonically cleaned and encapsulated

• 2015 fifty cent proof coin, featuring a ‘C’ for Canberra mintmark (the first fifty cent coin to bear such a mark)